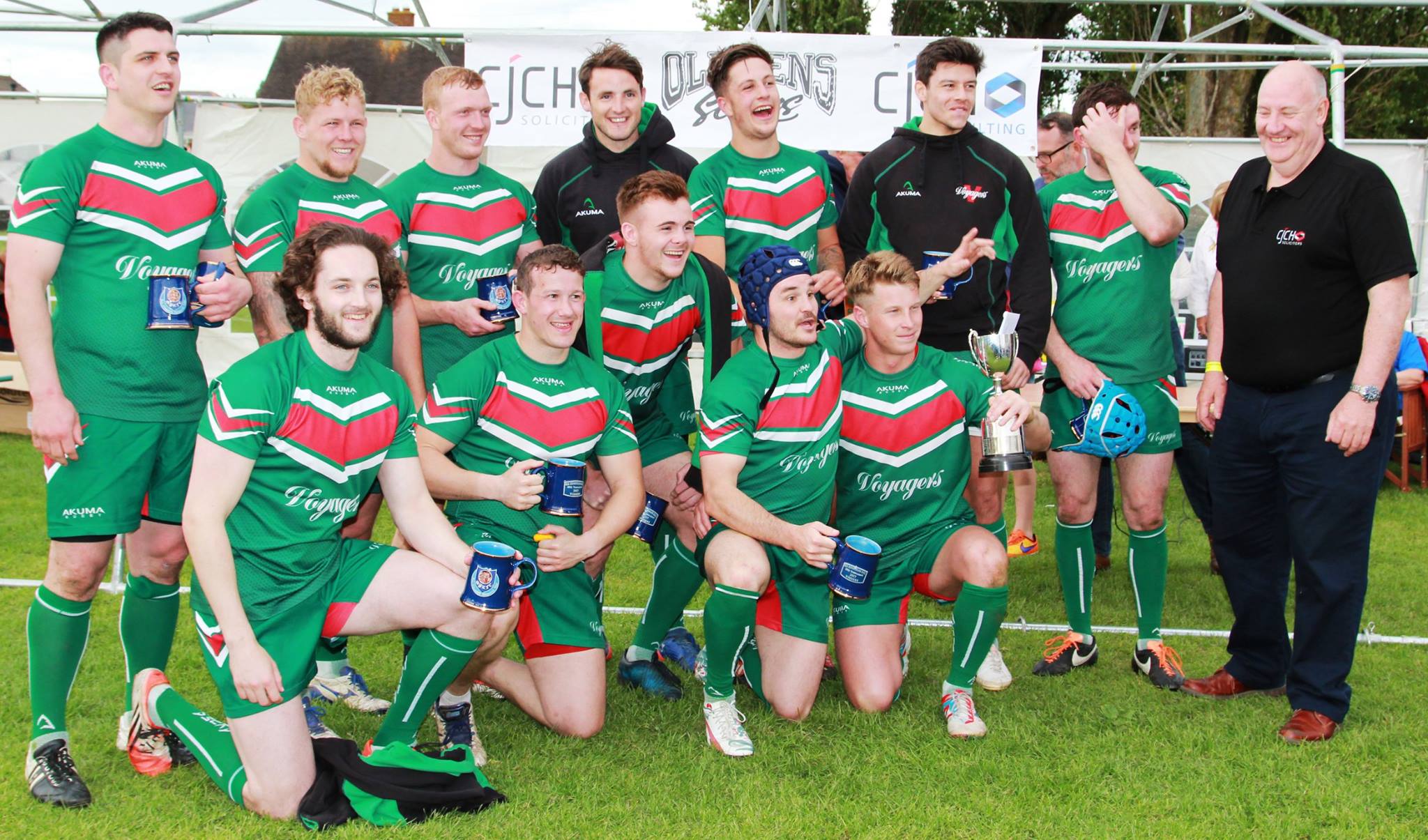 At CJCH we are passionate about the communities we operate in, and the people we interact without. Outside of the practice of law and delivering impeccable services to our clients, that passion includes contributing to, and supporting, educational development and sport. We are proud to have had the opportunity to support local sporting talents by sponsoring the Old Penarthians Sevens Tournament this past weekend. 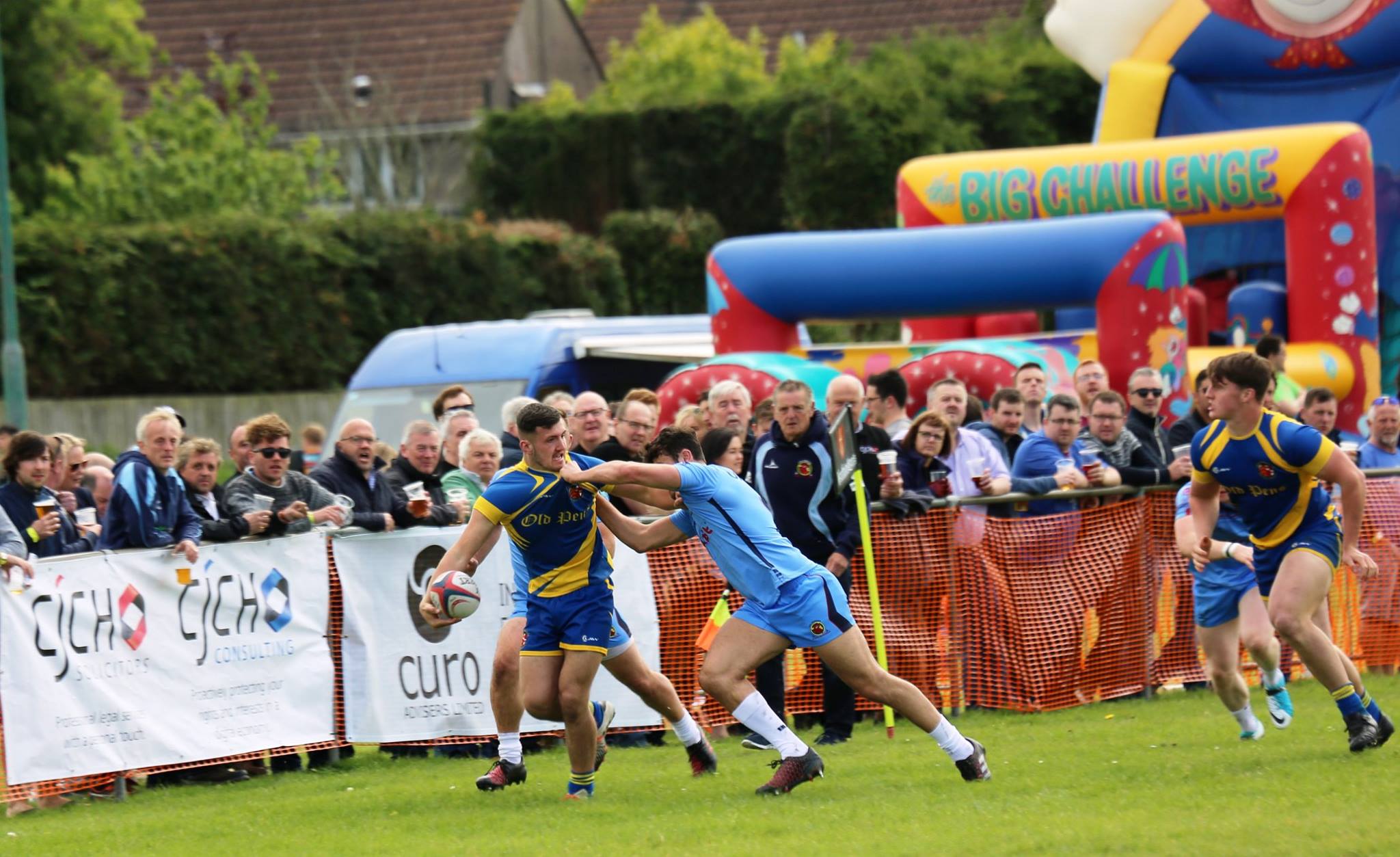 Full details of the events are provided in the club’s press release below:

The 68th running of the Old Penarthians Seven-a-Side tournament, sponsored for the first time by CJCH Solicitors took place on Saturday 20th May at Cwrt-y-vil Playing Fields.  And despite the poor weather during the week leading up to the event and the rain still falling an hour before the start of the tournament the matches themselves were played under blue skies and sunshine.

The attraction of Seven-a-side rugby was also a testament to the many hundreds of spectators who turned up to support an event that is an integral part of the Old Penarthians season.  Unfortunately, one integral part, Roy Churchill, was not present but in a moving tribute to the club’s former President, all players gathered on the main pitch prior to the event to join the spectators and members of the Churchill family in a minutes’ applause.

Whilst Roy’s memory will never be replaced his compere duties on the day were taken by Trevor Murphy, who forsook his Irish lilt for mid-Atlantic anonymity, assisted by tournament organiser David James with a cameo role from Club Secretary Tony Crimp. 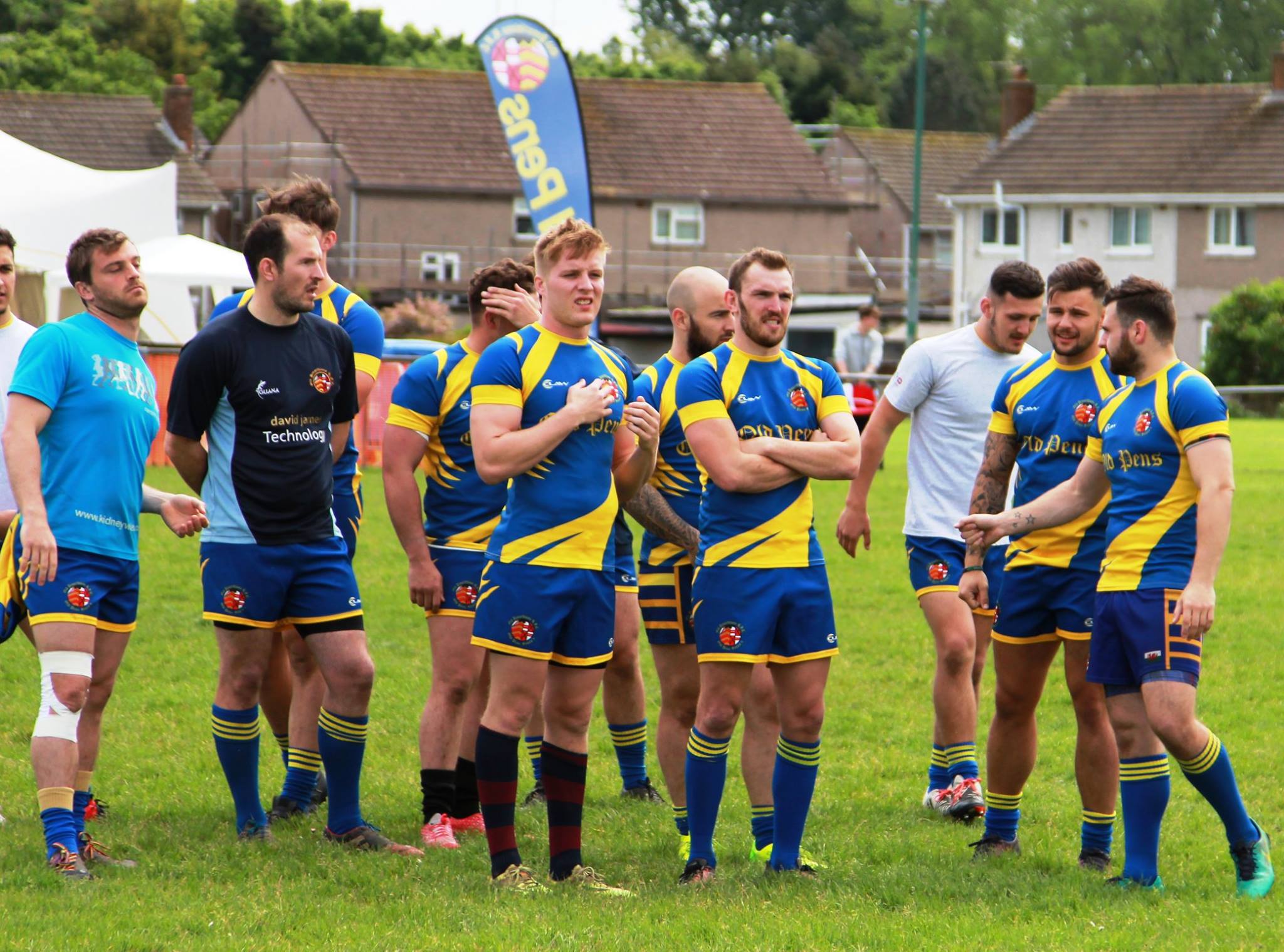 The organisation of the day was managed smoothly and despite the late withdrawal of three teams and some confusion with the scheduling not matching the order of the games listed in the programme not many of the spectators or players were inconvenienced or even noticed.

In fact, the most disturbance caused during the afternoon was at the start of the tournament when the roof was blown off the marquee.  Not that the volunteers manning the stalls and food outlets were phased in any way and operations continued uninterrupted.  Fortunately, the roof of the hospitality tent remained intact and the patrons were able to remain sheltered, watered and fed to a high standard by hosts Rod Hill and David Chandler, whilst enjoying Sevens rugby of an excellent standard.

And the tournament started in impressive style when Old Penarthians played St Josephs and ran out winners by 42 points to nil.  Richard Pilcher, Stuart Clarke, Owen Lloyd, Rhys Beynon, Joe Page and Luke Dawes starred for the hosts but Liam Union’s splash down for a try did not quite reach the heights of Chris Ashton.

Next up on the main pitch were Cardiff RFC who defeated our regular English visitors from Corsham.  At the same time on pitch B St Peters were victors over Fire Service after a close score at halftime. The closest game in the first-round matches was between two of the invitational teams from Spikey Glove and Preseli Baa Baas. The final score going to the Preseli team in a 31 -27 victory.

Scorpions outclassed the RAF in their match but thanks go Jack Margetson and Rich Peregrine for organising a side at short notice to cover another team withdrawal.  The team also included Old Penarthians regulars Richard Kynaston, Matt Stingl and Tony Harris.  The last match in the first round was between two of the favourites and past champions Voyagers and Glantaf.  In the end, it was a relatively easy win for Voyagers but results later in the day would prove that defeat was not a disgrace.

Round two of the Main Competition gave spectators the first sight of the Ponty Butchers, after their bye in the first round, playing against Old Penarthians.  The Butchers side are from Pontydawe and yes, they are supported by the butcher from the town who started the team about ten years ago.  The team also featured a past winner of the Player of the Tournament, Sam Evans, who at the time played for Welsh Charitables. Whilst the initial performance from Old Pens was competitive and the scores level at 5 -5 Ponty Butchers ran out winners 33 – 19 sending the Old Pens, who had not given up, for an early bath.

The other second-round matches saw wins for Preseli Baa Baas and Scorpions with Voyagers receiving a bye straight to the semi-final due to the absence of some teams.

In the Plate competition on Pitch B St Josephs, Spikey Glove, Corsham and Glantaf progressed to the semi- finals.

The semi-finals of the main competition featured some outstanding rugby and two closely contested matches.  Ponty Butchers just sneaked past the Preseli team 27 -19 and in a repeat of the 2016 final Voyagers competed against Scorpions. This time, however, Voyagers overturned their final defeat with a 28 points to 17 victory.  This win sent Voyagers to their fourth successive final.

The Plate semi-finals saw St Josephs inch pass Spikey Glove by a point in a thrilling 15 – 14 scoreline but Glantaf proved too strong for Corsham who despite the loss were pleased to have played three games and celebrated as if they had won the event.

Before the final, there was an excellent 7s match at U12 level between the Old Penarthians and Barry RFC.  Old Pens may have won the match but rugby was the winner when you can see the enjoyment of the participants and spectators watching the players of the future.  This was also true in the tag exhibition matches played before the competition started between age group sides from the Old Pens M&J section.  The coaches and parents of the players should be proud of the skill levels on show and it hopefully bodes well for the future. 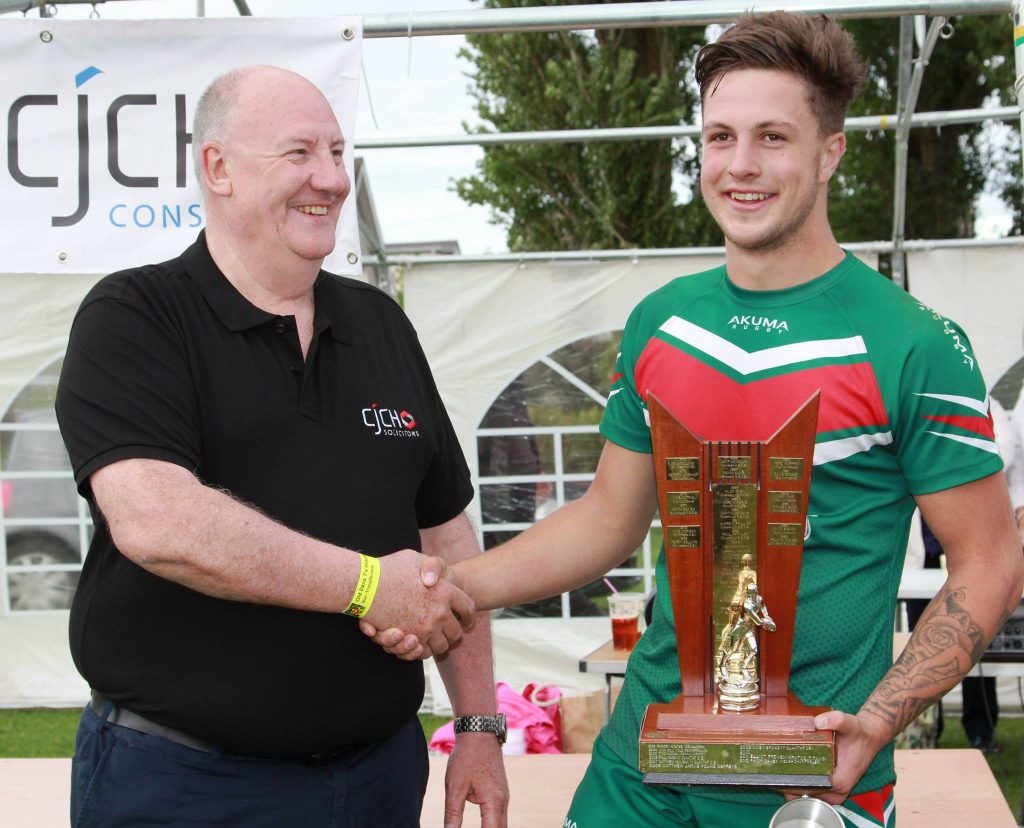 The first final to be contested was for the Golden Jubilee Plate and Glantaf, more used to playing for the main prize, were too strong for a St Josephs team that were affected by injuries picked up in the earlier rounds and were winners by 45 -21.

The final of the newly inaugurated Roy Churchill Trophy was a keenly contested match between the two most athletic and physical sides in the competition. Voyagers with their experience of previous finals edged the result over Ponty Butchers but the 28 -19 scoreline does now show the competitiveness that saw the Butchers within 2 points of the lead with only 3 minutes to play.  Ultimately the control of the ball in the last few minutes was the key factor and under the stewardship on Man of the Tournament Joe Scrivens Voyagers were worthy winners.

After the match, the presentations were made to the winning and losing finalists of the Plate and the Roy Churchill Trophy by the senior partner, Stephen Clarke, of CJCH Solicitors, the main sponsor of the Tournament. 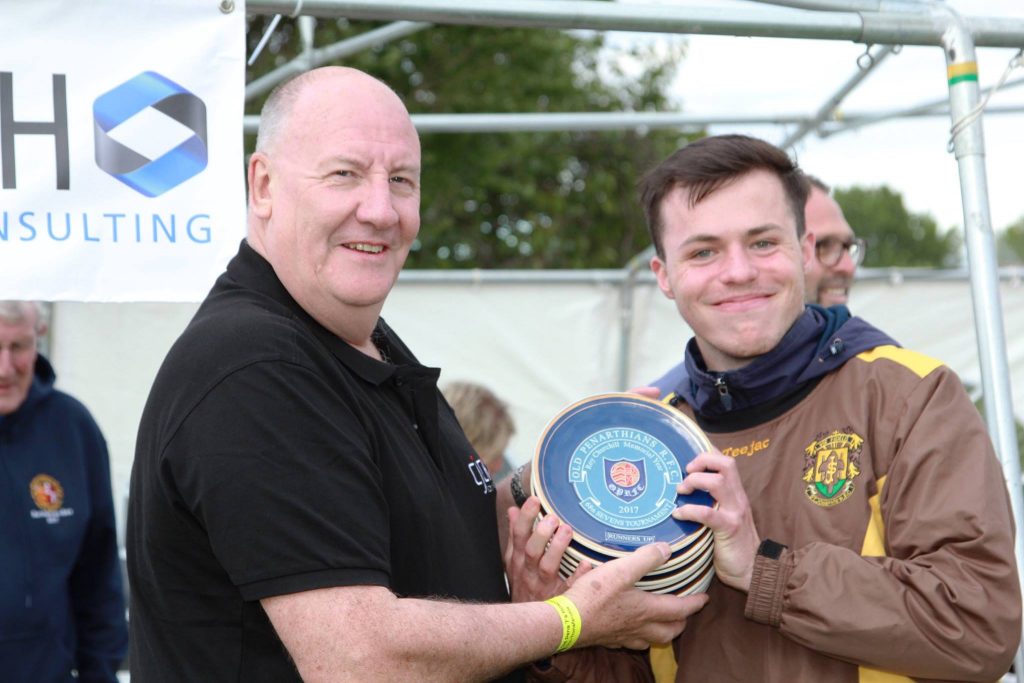 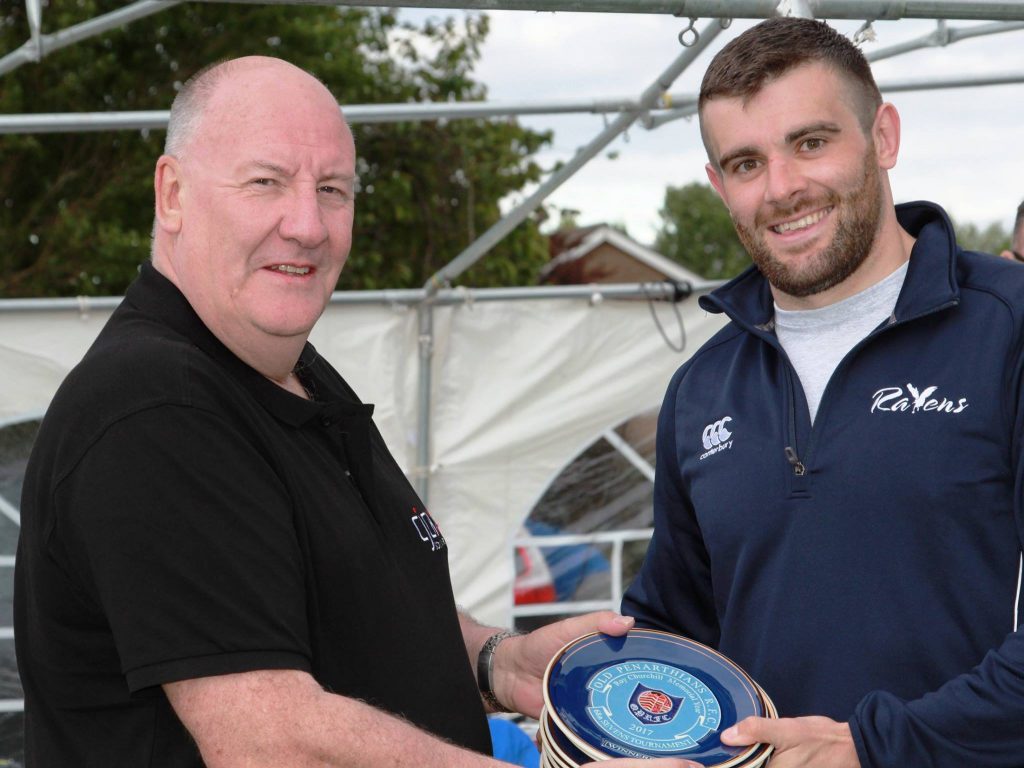 (Image credits: All images and photographs displayed are courtesy of Old Penarthians RFC)